Came after voting in 10 minutes: Voter

Voters continue to reach the polling booth set up at Alcon Public School, Mayur Vihar Phase-1, Delhi. Voters Jayesh and Shasmita Tripathi returned after casting their vote in 10 minutes. Jayesh said that there is no crowd yet, he was number 16, he came after voting in about 10 minutes.

BJP MP Pravesh Verma casts his vote with his wife

BJP MP Parvesh Verma and his wife cast their votes for the MCD elections at a polling booth in Matiala village. MP Parvesh Verma said that AAP was claiming to form government in Goa, Uttarakhand and UP but people know that they have a habit of lying. During COVID, no one from AAP was seen working for the people. Only MCD workers were standing with the people. In MCD elections we are getting around 210 out of 250 seats:

Women’s safety, cleanliness, construction of roads are priority for me: Student Sonam

Voting underway for #DelhiMCDEelections, Visuals from a polling booth in Matiala village

“Roads, women’s safety, water are the issues I considered for voting. People should come out and vote & understand their responsibility,” says first-time voter Sonam pic.twitter.com/BQNCc7GoGj

Tight security arrangements at the booth in Laxmi Nagar

Tight security arrangements are in place at the Mangal Bazar booth in Delhi’s Laxmi Nagar. At the polling booth in Laxmi Nagar, there is a crowd on the tables of the parties to get their voter slips made.

Tight security arrangements outside the polling station of Najafgarh

Tight security arrangements have been made outside the polling station of Najafgarh regarding the MCD elections. Voters are not being allowed to carry mobiles inside. Security personnel say that we have come to know from the newspaper that voters can take mobiles inside, but we have not received any orders in this regard, due to which we are not allowing mobiles to be taken inside. On the other hand, at the polling booth in Najafgarh, there is a crowd of voters getting their slips made at a party table. 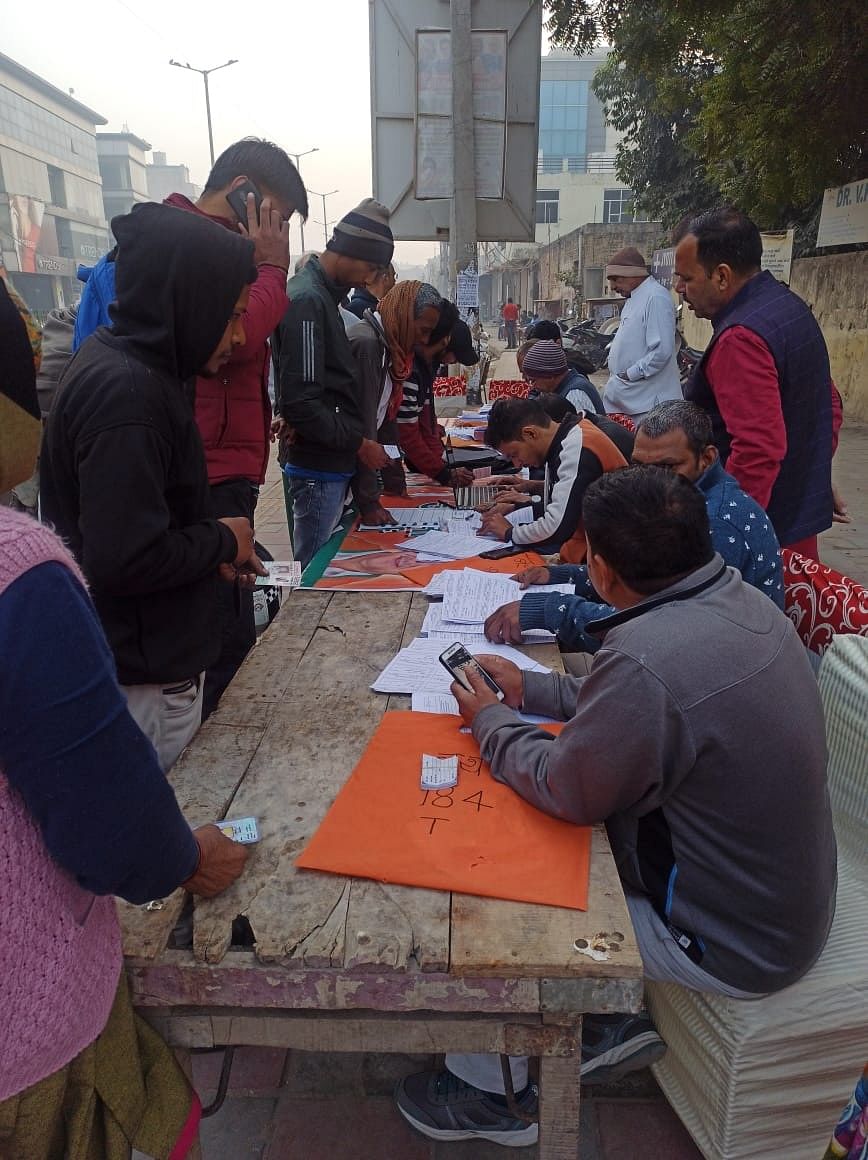 Sisodia said – 1.5 crore people will choose their government for the corporation

Delhi Deputy Chief Minister Manish Sisodia said that 1.5 crore people will elect their government for the corporation. The work of MCD is to clean the garbage of Delhi, to give honest licenses to the traders, to get the streets built, to clean the parks. Cast your vote thinking that you are voting to keep Delhi clean.

This election is about streets, garbage, drains and cleanliness: Maken

Congress leader Ajay Maken arrives at a polling booth in Rajouri Garden to cast his vote for the MCD elections. Congress leader Ajay Maken after casting his vote in MCD election said that this election is the election of streets, garbage, drains and cleanliness, I think Congress party candidates are the best. Last time we got 24 per cent votes and won 31 seats. In 2019 also we got 22-23 per cent votes.

Congress leader Ajay Maken arrives at a polling booth in Rajouri Garden to cast his vote for #DelhiMCDEllection2022 pic.twitter.com/Hh6Ai2H9VK

Voting begins for 250 wards of Municipal Corporation of Delhi.

56 percent candidates have studied up to 12th

Before the start of polling, Delhi Chief Minister Arvind Kejriwal tweeted and appealed to the people to vote. He wrote that today there is voting to make Delhi clean and beautiful, there is voting to form a corruption-free government in the Municipal Corporation. My appeal to all the Delhiites – do go to cast your vote today to form an honest and working government in the Municipal Corporation of Delhi.

My appeal to all the Delhiites – do go to cast your vote today to form an honest and working government in the Municipal Corporation of Delhi.

Delhi State Election Commission Commissioner Vijay Dev has appealed to the people to vote in large numbers in the MCD elections. He has said that democracy is strengthened by exercising one’s franchise in a democracy. In this episode, all the people of Delhi should welcome the great festival of their right to vote.

1,349 candidates are fighting for 250 seats. Of this, 640 are males and 709 are females. BJP and Aam Aadmi Party have 250 candidates and Congress has 247 candidates. Other parties including BSP, NCP, Janata Dal (U) have also fielded candidates. The number of independent candidates is 384.

This time you will be able to take mobile to the polling booth, but…

Regarding the MCD elections, the Delhi State Election Commission has announced that this time voters will be able to take mobile phones to the polling booth. However, during this time they will be strictly prohibited to use mobile. Phone has to be kept on silent mode.